One Step Ahead: 7 Sophisticated Staircases Designed To Steal the Show

Staircases can be a journey in and of themselves. While their function is primarily connection and circulation, a well-designed staircase can be a sensorial experience itself. The ephemeral state of being in between can also be very significant in the longer route. They can add dimension to spaces, channel light, guide usage of space and also create opportunities for interaction. In some instances, they can also give rise to intermediate spaces either for display or storage. Here are some staircases that embrace drama and dominate the space. The stairwell shown above is part of one of the housing blocks near Munksjön lake. Apartments in the square-plan housing block are placed on the periphery with an atrium at the center that acts as the circulation block. The skylight above helps illuminate the center all the way through, creating a more welcoming experience for visitors. This space also brings in fresh air. Individual flights of staircases within the circular cutout are angled are placed in different directions across the height to create interest and continued visibility.

The Ladder Hall within the Chongqing Zhongshuge Bookstore is reminiscent of the stepwells that can be found in India. The staircases are all places along the periphery of the room, moving inwards as their height decreases, much like a reverse beehive. Here, the staircases also double as bookshelves and resting spaces for visitors. The connecting flights of stairs throughout the building almost create a cocoon of books. Making this illusion even more powerful is the addition of a mirrored ceiling which doubles the height of the space and creates a kaleidoscope of books and steps. There is no question about what the focal point of this space is. A large copper helical staircase starts on the fourth floor and goes all the way down to the entrance of the museum, seamlessly connecting the floors in between as well. This construction is in line with the architect’s vision of a space that is a captivating blend of the old and new. It also alludes to the building’s scientific nature. The staircase is imagined as an abstract version of a DNA strand and is built using 160 tons of steel and 10 tons of copper. The influence of Spanish Mediterranean architecture can be seen in the science complex. The construction houses 100 offices, teaching spaces, classrooms, a large lecture hall, instructional labs, conference rooms, rooms for staff and more. The main gathering area within this complex is the atrium. Wooden finishes decorate the entire space. There are several bridges across all floors that stagger inwards as one looks up. What catches one’s eye is the large suspended staircase that almost looks like a winding tunnel that goes in and out of these levels. The colors used on these steps match the wooden slats used throughout the building. 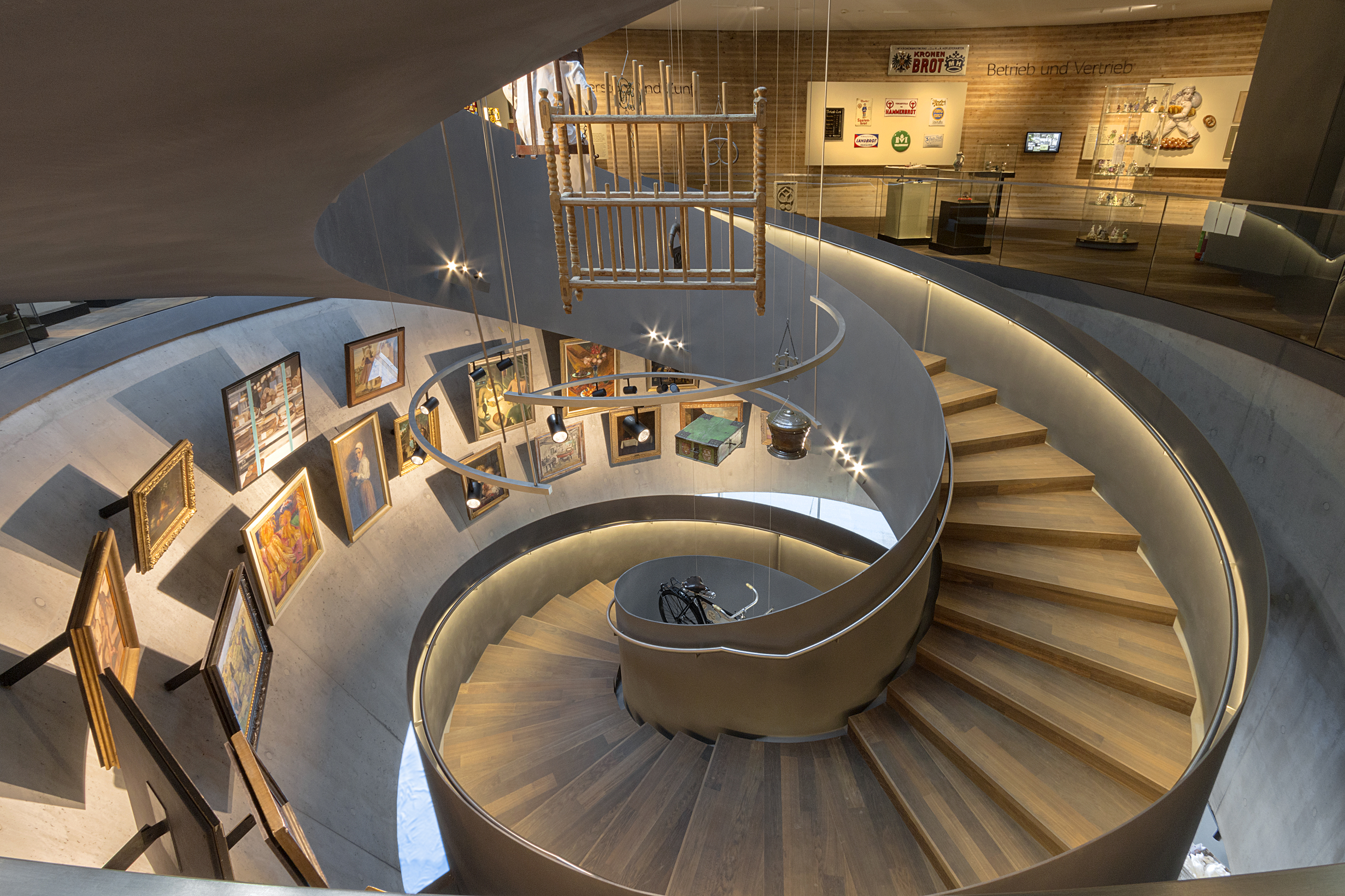 While this building looks like a futuristic pod on the outside, it houses a warm and cozy exhibition area within. This space is inspired by the idea of the cabinet of curiosities. Selected display items are suspended in the central atrium like a chandelier. This atrium is bordered by a spiral staircase that connects the different levels and also acts as a gallery itself. In some parts, the sides of this stairwell also include certain display pieces that viewers can look at from different angles as they climb the steps. Drawing from the habitation wheel of the first geostationary space station in Herman Potocnik Noordung’s book, the center is a circular monolith that appears to be in motion. Visitors travel down a curved ramp to enter the building. Inside, one can gradually travel down a spiral path that is a cross between a ramp and a staircase. Pairs of risers are placed at certain intervals with larger platforms between them to create a leveled incline. The platforms also serve as exhibition spaces and connect to other circular platforms and voids. Large skylights above fill the entire space with sunlight. Woodland whimsy comes alive in this sculptural staircase that connects three levels of a restaurant. Its organic design mimics the growth of a plant from the root. The curving treads and sinewy handrails allude to the vines, branches and leaves of the plant. The designer also shaped the glass barriers around the staircase to follow the pattern and topped them with wooden rails. The use of European Oak also makes it feel more natural and helps it blend in with the interior of the restaurant.

The post One Step Ahead: 7 Sophisticated Staircases Designed To Steal the Show appeared first on Journal.

OFFICEUNTITLED’s Vision for the Tower on Sunset Reflects ...