The judging has concluded, and the results can finally be revealed for architecture’s most inspiring photography competition. Architizer is thrilled to announce the Winners and Commended Entries for the Third Annual One Photo Challenge!

This year’s Student Winner is “Vertical Life” by Xi Chen, who is studying for a Master’s in Digital Photography at the School of Visual Arts, New York City. Xi’s image tells a story of unique contrasts in Manhattan, juxtaposing the elongated skyscrapers of ‘Billionaire’s Row’ with the serene oasis of Central Park below.

In contrast, this year’s Non-Student Winner — “A Glimpse of Heaven” by photographer Jean-Claude Ardila — sees the spectacle of a paraglider framed by the bold form of the Tampa Museum of Art in Florida. Both winning images present bold compositions that play with our perception of scale and the ways in which architecture frames our lives, both literally and figuratively.

Without further ado, we present to you the Winners and the Commended Entries for the 2022 One Photo Challenge, including both the photographs and their accompanying stories… “In New York City, the world-famous concrete jungle, people live their lives up in the air. But there are always oases of peace on the ground, providing breathable green places among concrete and steel. The gaps in Central Park’s foliage naturally form a viewing window, showing the vertical lifestyles of New Yorkers.”

Award-winning Brazilian photographer and One Photo Challenge juror Ana Mello commented: “For me, ‘Vertical Life’ raises some questions. Currently, what are our life choices? Can we all choose? What are our escape moments and what is the cost of that? For this reason, for me, it is a very striking photograph because it transcends technical and aesthetic discussion.” “This image was taken at the Tampa Museum of Art. There is an opening on the building guiding your eyes towards the sky. I laid there with my camera on my face to avoid shake and trying to capture the best angle using the lines in the structure towards the clouds. I noticed there were paragliders in the area and I waited patiently for one to appear in my frame. I am glad I did.”

One Photo Challenge juror and renowned photographer Krista Jahnke reflected on Ardila’s image: “The framing of this image plays with perspective in a disorienting way. You know you’re looking towards the sky by the glimpse of the paraglider but you can also understand the one point perspective to be an elevation shot looking down a corridor. Reading the image as if in two directions gives a surreal quality to the photograph that is achieved through the minimal subject matter.” 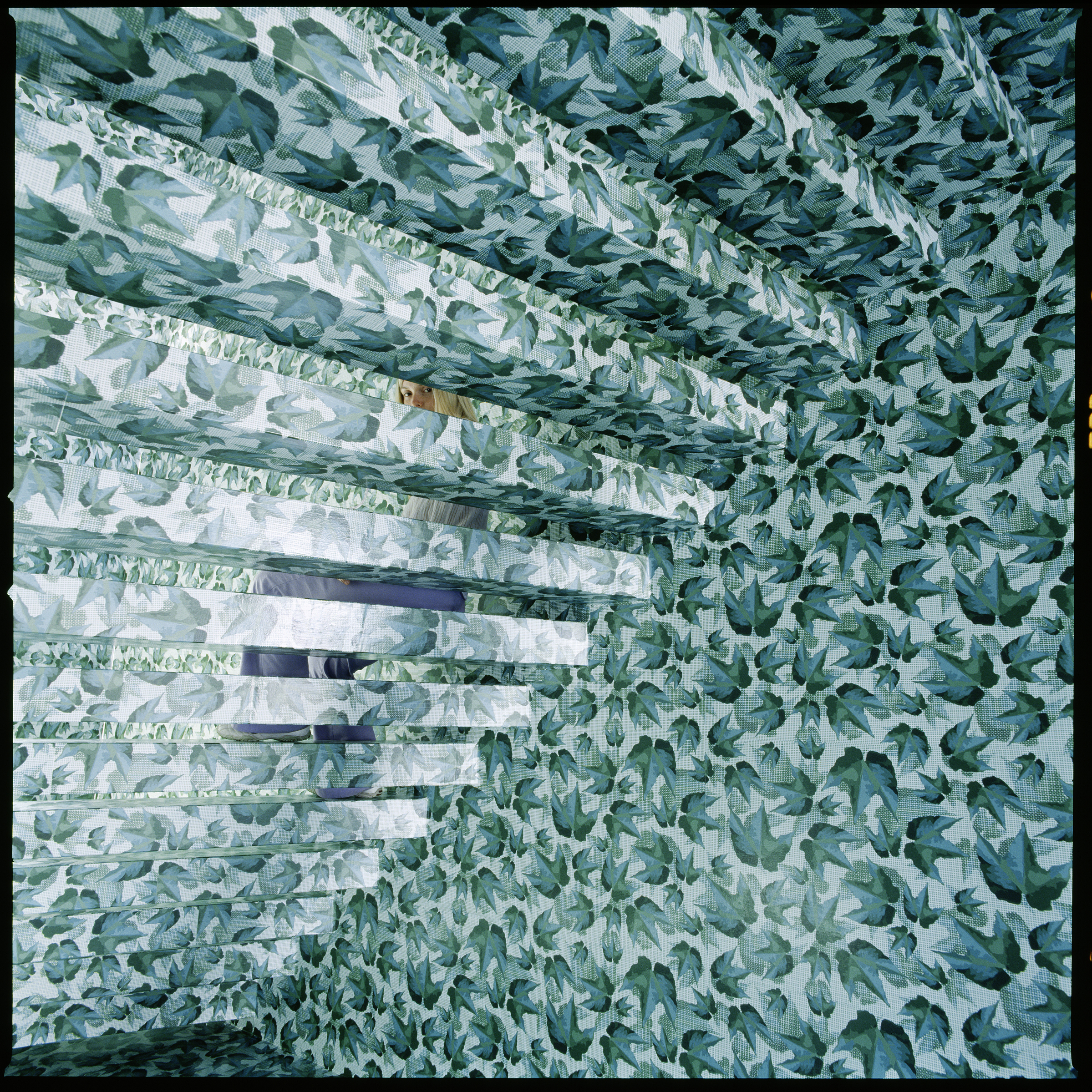 “This image is my photographic translation of a space-dissolving surface design of a stairwell interior. Its design is part of the conversion of a bourgeois house from the 1900 into an apartment building.

The woman’s steady gaze questions the observer: What is the substance of this image? Is it real or imaginary? “This photo was taken in Dia Beacon in upstate New York. Looking out, the surrounding nature has become vague silhouettes and paint brush like colors around the clear glass at the window. One then focuses almost only at the limited pocket of beauty, details highlighted, colors embellished, like a camera focusing on a target. When the light shines through, it’s the most magical moment.” “Photograph taken at the plaza of Kanagawa Institute of Technology in Japan designed by Ishigami Junya.
The photograph is titled Kites as the square openings on the thin metal roof distorts when viewed from above.
At different seasons of the year, the metal roof expands and contracts according to the changing temperature.
Thus, different shadows are casted on the plaza space below.

I intently waited until a passerby walk by underneath the roof in order to give the audience a notion of the sense of human scale as well as the feeling of vastness through architecture.
The negative white space is used as a metaphorical reference to the sky and the openings to be the kites floating in the wind.
Through this expression, the photograph intends to evoke a feeling of isolation and to question our existence as mankind and the vastness of the space we inhibit.” “POPCourts!, a 7,000 SF community plaza in the Austin neighborhood on Chicago’s West Side, was born from the pandemic and civil unrest and developed in concert with Mayor Lightfoot’s INVEST South/West initiative. The goal was to provide a safe community space that residents could enjoy outdoors during the pandemic while also creating a visible presence along Chicago Avenue.

The entire design team transformed this empty city lot into three-zone “Courts,” each serving a variety of community functions, allowing activities to “Pop” up and transform over time. The basketball court doubles as a community plaza. The gravel drive hosts food trucks, farmer’s markets, and other seasonal vendors, and the shaded lawn functions as a Food Court with casual seating. Local artists painted murals on the adjacent building walls, depicting figures such as Malcolm X, Harriet Tubman, and Maya Angelou.” “My intention from this project was to reduce the minimalist architecture design of Jameel Arts Centre to a single frame and presents its white façade and clean lines in the simplest way possible. What made the capture more interesting is the passing mechanical guy which was a happy accident that contributed a human element to the otherwise too pure of a picture.” “This is the story of a monument: a sculpture that talked to a building, the sun, the sky and to me; a conversation that gave me a photographic understanding I had never encountered before.

I was so excited to experience Dubai Expo 2020 that I traveled to the grounds directly from the airport. I intended to do a walk-through first but was taken aback by a sculpture at the Qatar pavilion and stayed there until nightfall. Qatar’s pavilion, designed by Santiago Calatrava, is a modern interpretation of Qatar’s Coat of Arms: two swords encompassing a dhow amidst an island with palm trees.

A golden sculptural monument outside the main structure represents the palm trees. Although static, the sculpture moved; and I was challenged to find a way to photograph its dynamics. This photo of the 20-meter-high sculpture was taken by standing inside the 5.5-meter square base using a wide-angle lens.” “Parkaden (Car Park) 1964 by Hans Asplund in Stockholm, Sweden. Between a steady flow of cars going through the centrum, there was a 1-2 second moment with this man walking. This was one of the two shots I managed to quickly capture. It was only later that I noticed that the patterns in the wall are the floor numbers in mirror!” “Summers in NYC are eagerly awaited by most but can also be particularly daunting to the vast majority… With overflowing public transit and towering buildings that reflect back concentrated beams of heat unto unforgiving concrete surfaces, the scattered plazas and public spaces around the city are burdened with a heavy task. Surely, they provide a pocket to break free from the city’s relentless grid but, at times, they fall short to shape an adequate environment for enjoyment. A number of these, with their manicured planting and their lackluster attempt to give some space back to the public, are remnants from a modernist era. Herein, they fail to be a desperately needed oasis for the thirsty citizens of an increasingly warming concrete jungle.”

“Suspended 40ft in the air, a woman floats on a web-like net.

The scale of the human form to the net equates to a spider and its web. The artist, Tomás Saraceno, transports the user to a sensory experience in which we become the arachnid. The sun-like sphere fades into black and we are transported to a universe where we feel every vibration of the web and our ears consume all of the frequencies echoing in the darkness.

It’s a subtle reminder of how small and isolating we can feel in a vast and expanding universe.

Photo from Tomás Saraceno’s exhibition Particular Matter(s): Free the Air: How to hear the universe in a spider/web exhibited at The Shed.” “When walking through downtown I am constantly fascinated by highrise buildings and the impact they leave on us. Do we feel small and overwhelmed by this kind of architecture? Or is it similar to what we feel when we climb mountains or get lost in dark valleys? We certainly do enjoy the view when we reach the peak or rooftop. This urban landscape seems to be a reinterpretation of the white-top mountains that surround us and can be spotted vaguely in the distance.

While I was watching the façade workers doing their job the image of an alpine scenery was recalled. An urban mountain landscape waiting to be conquered by humans. Mysterious, frightening, but also loved. Exactly like pristine nature appears to us.”

Congratulations to every Winner and Commended Entrant, as well as all 100 Finalists, which can be viewed in full via our special feature “100 Photos That Tell Powerful Stories About Architecture in 2022.” This highly anticipated and captivating publication was distributed to 125,000+ newsletter subscribers and 4+ million social media followers, and the reception has been incredible!

Thank you to all participants for sharing these amazing photographs and telling such fascinating stories about architecture! Interested in entering next year’s One Photo Challenge? Be sure to sign up for updates by clicking the blue button below.

Register for the Next One Photo Challenge